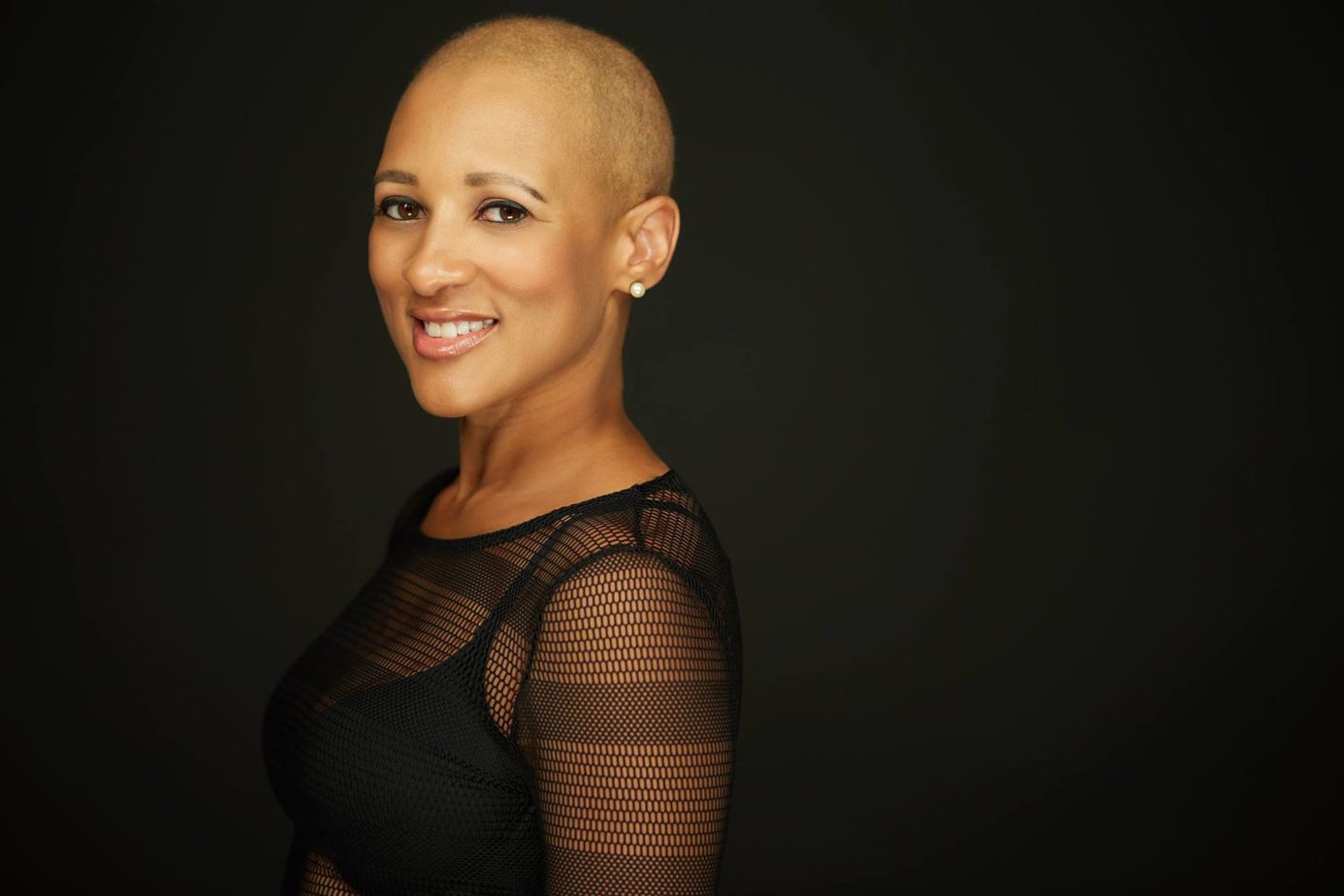 We all know October is Breast Cancer Awareness month.  Each year we see Breast Cancer Awareness walks, our sports teams adorn pink and events are popping up left and right.  But what caught my attention this year was not the pomp and stance October usually brings but the very personal, micro-journaling type sharing Chris-Tia Donaldson, CEO of tgin, posted to her social media.  In an industry where hair is praised and often the center of the conversation, Chris-Tia opened up about her journey with breast cancer recently and posted a very candid and bald photo of her to Facebook.  Over the course of this month, she is sharing her journey with breast cancer on her social media accounts through an informative series entitled: “This is Only A Test: What Breast Cancer Taught Me About Faith, Love, Hair, and Business.”

About 20% of breast cancers are found by physical examination rather than by mammography.

Like many women, Chris-Tia noticed a lump in her breast while showering.  According to BreastCancer.org, about 20% of breast cancers are found by physical examination rather than by mammography.  She kept waiting for the lump to go away but it never did, so Chris-Tia made an appointment with her OBGYN after 3 months of being in denial.  Admitting that Cancer has always been on her mind since her mom passed of non-Hodgkins Lymphoma at the age of 49, Chris-Tia tried to reduce her chances of Cancer by adopting a healthy lifestyle, exercising regularly and abstaining from eating meat.

My mom died of non-Hodgkins Lymphoma at the age of 49 less than one month after I graduated from high school and two months before I started my freshman year at Harvard. Against doctors orders, she delayed having a bone marrow transplant, so that she could make it to my high school prom and graduation. . . Cancer has always been on my mind. I thought if I ever got cancer, I would be at least 50 years old. To reduce my chances of getting it, I adopted a super healthy lifestyle, exercised religiously and didn’t eat meat. I’m not go lie though, since being a lawyer I’ve always loved my licka, which they say can contribute to an increased incidence of breast cancer. #breastcancer #breastcancermonth #breastcancersurvivor #blackwomengetbreastcancer #youngwomengetbreastcancer #morethanpink #susangkomen #fightlikeagirl #tgin #tginatural #tginceo #ctbreastcancerunder40 #breastcancerunder40 #thisisonlyatest

The post that interested me the most was her mention of genetic testing and the BRCA gene of which most women are unaware.  Due to a history of Breast Cancer in my family, I decided to undergo genetic testing last year so I was thrilled once I saw someone else talking about this preventative method. So often, we hear about mammograms and self-examinations but rarely is the push for genetic testing brought up in conversation.  I even had one doctor tell me I’m too young for a mammogram and they didn’t think it was necessary – even with my family history.  It wasn’t until a year later another doctor suggested genetic testing for the BRCA gene just to be on the safe side.

BreastCancer.org further states that most people who develop breast cancer have no family history of the disease.  However, if you do have a family history of breast cancer, ovarian cancer, or both, heredity could have played a role in the cancer’s development.  Most inherited cases of breast cancer are associated with two abnormal genes:BRCA1 (BReast CAncer gene 1) or BRCA2 (BReast CAncer gene 2).  Women who inherit a mutation, or abnormal change, in either of these genes — from their mothers or their fathers — have a much higher-than-average lifetime risk of developing breast cancer and ovarian cancer.  Chris-Tia’s doctor insisted she get tested for the gene mutation.

When my breast surgeon insisted I get tested for the BRCA gene mutation, I thought she was crazy. I thought only white women, like Angelina Jolie, have the BRCA gene mutation, but as it turns out black women do as well.. . The function of the BRCA genes is to repair cell damage and keep breast cells growing normally. But when these genes contain abnormalities or mutations that are passed from generation to generation, the genes don’t function normally and breast cancer risk increases.. . More than 40% of the women with an abnormal BRCA gene had no close relatives with breast or ovarian cancer. This suggests that family history alone may not be enough to identify black women at high risk of having an abnormal BRCA gene.. . The National Comprehensive Cancer Network recommends women diagnosed with breast cancer at age 50 or younger be tested for the genetic mutation. The advice stems from the fact carriers of BRCA1 and BRCA2 mutations have a higher risk of early-onset breast cancer.. . Women with an abnormal BRCA1 or BRCA2 gene: · have between about 40% and 85% lifetime risk of developing breast cancer · have a much higher-than-average lifetime risk of ovarian cancer; estimates range from 15% to 60% · have a much higher-than-average risk of developing a new, second breast cancer after an initial diagnosis.. . Despite the findings, many minority women don’t have the recommended genetic testing and counseling, either because their doctors don’t suggest it or they choose not to do it if their doctor does recommend it. If you or someone you know has been diagnosed with breast cancer, make sure you/they ask your/their doctor about genetic testing. #breastcancer #breastcancermonth#breastcancersurvivor#blackwomengetbreastcancer#youngwomengetbreastcancer#morethanpink #susangkomen#fightlikeagirl #tgin #tginatural #tginceo #ctbreastcancerunder40 #breastcancerunder40 #thisisonlyatest

Ultimately Chris-Tia ended up getting a lumpectomy, but that didn’t stop her from pressing forward with running the business of tgin.  With new products like an edge control and curl definer lined up to launch soon, Chris-Tia made it her mission to test her products while in production as much as she could before completely shaving her head a month before starting chemotherapy.

I cut my hair a month before starting chemo just to give myself time to get used to seeing/styling my hair short. I made sure I had just enough hair to keep working on new @tginatural products, including our Edge Control, Curl Definer and a Mango Butter which will hopefully be released later this year.. . As the CEO of the company, I’m heavily involved in the initial stages of product development and work closely with a chemist to create products that work on my hair texture. Once I get it to a point where I like it, I usually bring in other testers to try out the product and send us their feedback.. . #breastcancer #breastcancermonth#breastcancersurvivor#blackwomengetbreastcancer#youngwomengetbreastcancer#morethanpink #susangkomen#fightlikeagirl #tgin #tginatural #tginceo #tgin #tginatural #cantwaittorockshorthairagain #shorthairdontcare #ctbreastcancerunder40 #breastcancerunder40 #thisisonlyatest

I remember taking a final naked selfie before going in for my lumpectomy not knowing what my breasts would look like when I came out of surgery.. . I spent so much time on the internet and Instagram looking at other people’s surgical outcomes (e.g. lumpectomy, mastectomy, bilateral mastectomy, no reconstruction, etc.), that I had prepared myself for the worse. When I finally took the steri-strips off to see my surgical scar, where they removed a 2.5” tumor, there was nothing even there. My surgeon was so amazing that she cut around the nipple leaving a scar that even doctors and medical professionals can’t detect, unless I direct them to the site.. . Initially, I adopted the same fearful beliefs about medications and the ensuing side effects. I would lurk on different message boards and read about the massive amount of weight women gained from the chemo steroids and how they felt nausea on the drug. I accepted that this was going to happen to me as well. Surprisingly, it didn’t. I actually lost weight, and my cancer body was BANGIN! I also only got slightly nauseous once.. . Along this journey, I’ve learned you can’t use other people as your benchmark, and that everyone’s cancer and life’s journey is different. You have to run your own race. Sometimes, you also have to accept that you’re just not in control, and that 1+2 may sometimes equal 4. You ladder will truly be greater and you may have absolutely nothing to do with that. When you think you’re at your worst and things can’t get any better, you never know how God is moving in your life, turning things around and making things better, day by day, moment by moment, second by second.. . Stop thinking about how it will happen, and just trust that it will. Looking back on my journey and what I have been through, I never thought I would look and feel as amazing as I do today. #breastcancer #breastcancermonth#breastcancersurvivor#blackwomengetbreastcancer#youngwomengetbreastcancer#morethanpink #susangkomen#fightlikeagirl #tgin #tginatural #tginceo #ctbreastcancerunder40 #breastcancerunder40 #thisisonlyatest

What’s been your experience with breast cancer or preventative testing? Comment and let me know!  Follow Chris-Tia and her journey on Instagram to see what else she shares as the month continues.  Also, shop products from tgin texturesnaturalhaircare.com.

Charlene Walton McCraney is a Dallas beauty and lifestyle blogger. After years of styling her and several friends’ hair as a hobby, offering advice and tips, she decided to combine two of her favorite things…writing and talking about natural hair!

TexturedTalk.com was created to promote healthy hair care for women of all textures and has since evolved into other beauty and lifestyle topics. Charlene loves teaching other aspiring bloggers on how to take their passion and turn it into amazing content to provide value.

Charlene is a previous beauty contributor to NaturallyCurly.com, CurlyNikki.com, and 21ninety.com.

When she’s not blogging she is probably crunching numbers as a Senior Financial Analyst, dancing or figuring a way to meet Beyonce in person. :)

You may also enjoy:

This site uses Akismet to reduce spam. Learn how your comment data is processed.

See What I’m Up To Everywhere Else